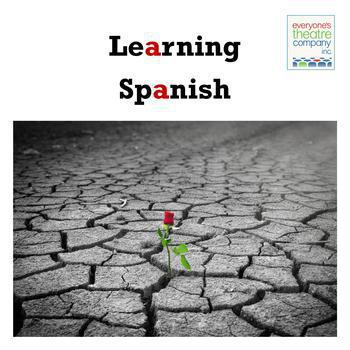 Everyone’s Theatre Company, Inc. is pleased to present their final production in the 2018-2019 season, “Learning Spanish,” a play written by Leslie David Perry.

Performances will be at MuCCC (Multi-Use Community Cultural Center), 142 Atlantic Ave, Rochester, NY 14607 on July 11, 12 and 13 at 7:30pm, and July 14 at 2:00pm. The cast features Doug Curry as Harry, Laura Thompson as Loretta, and Octavio Garcia as Steven. Advance tickets may be purchased for a discounted rate of $17 General Admission, $12 Seniors & Students at www.muccc.org. Door prices $22 and $17, respectively.

“Learning Spanish” is an unlikely love story that developed from a single act of kindness. Watts is a neighborhood in southern Los Angeles founded as a ranching community in the late 19th century that developed into a city and prospered in the railroad era. Watts transformed into a mostly working-class, African American section of LA in the 1940’s, but by the 1960’s had become known as a low-income, high-crime area with rampant violence and gang activity. Since then, Watts evolved into a predominantly Hispanic neighborhood still considered one of the poorest and dangerous areas of LA. This is the troubled neighborhood where “Learning Spanish” is set. Loretta is an attractive Hispanic single mother in her mid-thirties running from an abusive husband. She is strong and believes that this situation is a temporary setback, and is determined to build a better life for her tiny family. She is saved from a mugging attempt by Henry, an older bachelor that lives alone in a run-down but clean apartment. Henry mostly keeps to himself after losing the one woman he’d ever loved. He is well educated, but doesn’t get involved with people or activities, disappointed that his Masters in American Studies did not lead to a satisfying career. He simply got tired of trying after a while, and settled into a security guard job. He kept to himself, spending evenings reading and writing scads of letters about social issues to editors of newspapers and magazines as the one outlet for his thoughts. Henry is uncharacteristically moved to help Loretta and the girls, and they develop a friendship at a time when they both needed it the most. Loretta finds her voice, Henry finds companionship, and everyone is better off for it.

“Learning Spanish” is directed by Gary DeWitt Marshall, III. Any filming, recording or broadcast of this play is strictly prohibited.